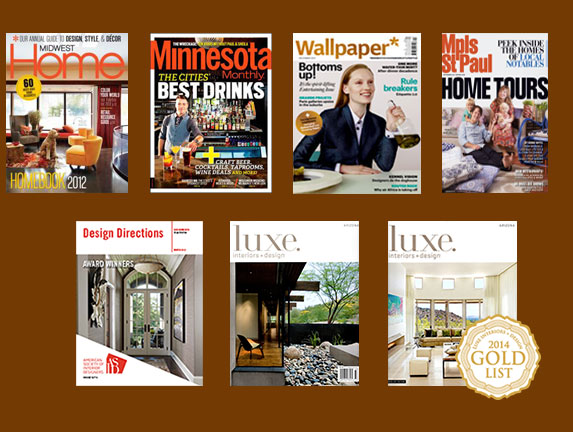 John was one of five designers featured in the Minnesota Monthly article "Five on the Rise." His projects have been seen in the pages of Mpls/St. Paul Magazine, Midwest Home & Garden, Lakestyle, The Wallpaper Magazine and the Minneapolis Star Tribune. Most recently, John was featured in Mpls/St. Paul March 2014 magazine as a recipient of the 2013 ASID Design Award in the category "Residential - Multiple Rooms with over 2,000 sq. ft" as well as being named to the distinguished Luxe Magazine's 2014 Design Gold List. The Luxe Interiors + Design GOLD LIST 2014 is a compilation of design professionals from across the country whose projects have been featured in the magazine's pages over the past 18 months. John was the only interior designer listed for the State of Minnesota.